Pastor  Jeremy Husby delivers a sermon entitled “God Is With Us” based on Matthew 1:18-25 at Peace Lutheran Church in Hartford, Wisconsin.

When you hear the account of Jesus giving sight to the man born blind, it might take a little bit, but you can eventually see yourself in the story, standing in the sandals of the sightless man.  Maybe it is because you actually have an affliction affecting your eyes, but most certainly, for all of you, you can see that you were born spiritually blind and Jesus, through his powerful Word, gave you the prescription glasses of faith to see him clearly as your Savior.

It is much the same when you hear about him healing the lame, making the deaf to hear, and even when he raised Jairus’ daughter and his dear friend Lazarus back from the dead.  Perhaps you have a somewhat similar physical limitation, but the spiritual impact is undeniable.  You were, by nature, blind, deaf, and dead enemies of God, but Jesus has made you spiritually healthy and whole and, by the gift of faith in his forgiveness won for you, has made you perfect before your heavenly Father.

But what of the account today?  With what malady are you to identify?  No one, other than Joseph and Mary, has had to struggle with the physical implications of an impregnation by the Holy Spirit.

However, like Joseph, have you ever had a difficult decision to make?  One that caused you to pit your personal feelings; your pain, your sadness, and your future well-being against something that you truly love?  Has it ever appeared to you as though the consequences of sin in the world around you have made it difficult to just go on living your life the way that you wanted to live it?

Maybe it was with a difficult medical diagnosis, either your own or issued to someone you love.  This isn’t the way that you expected it to work out.  You saw quite a different life, but now it’s all but a fleeting and forgotten dream.  What are you supposed to do now?

You may have felt that way when your marriage was going through its darkest days…or maybe those days are currently quite dark.  You aren’t perfect, but you’ve been doing your best.  Why can’t he see that?  Or, maybe it’s the fact that, despite your searching, the darkness is there because you haven’t found anyone to stand in the light with you.  That’s not at all how you thought it would be when you were growing up.

Perhaps that feeling comes often—like whenever you open your paycheck and your mortgage on the same day.  You studied hard to get that degree.  You put in long hours for low pay, expecting that promotion that was all but guaranteed to you.  You planned; but things didn’t go according to that plan.

No, the confusion and difficulties you are facing are not the exact same that Joseph faced in the biblical account before you today, but you can likely identify with his feelings before the angel removed his fears.

Joseph is, indeed, a wonderful example of faith.  Through the Word today, you see a man who perceived a problem in his life, listened to God’s Word, and did what God told him to do.  There is always room for improvement in your faith-life, and being more like Joseph is a good direction to go and to grow into.

However, the focus of this account is not fixed on Joseph.  Instead of placing yourselves in his sandals and searching for ways to amend your lives to be lived more like his, listen again to the most important reason why this account was recorded:

All this took place to fulfill what the Lord had said through the prophet: The virgin will be with child and will give birth to a son, and they will call him Immanuel – which means, God with us.

The reality of the situation is that, while it is true that Mary didn’t cheat on Joseph, Joseph still had to deal with the consequences of Mary being pregnant and the child not being his.  Just because there was an explanation for how she became pregnant, that didn’t take away what was an obstacle in Joseph’s life.  No, God didn’t remove the obstacle, but he did give Joseph strength to face it on a daily basis.

God didn’t promise you a rose garden.  He didn’t promise to open a window when the door in front of you is locked and you are without any hope of finding a key.  What he did promise is Immanuel, which means, God with us.

No, he may not take away the thorns, thistles, and weeds that surround you while all you are trying to do is plant good seeds into the soil.  It’s entirely possible that he won’t supply you with a sledgehammer to bust down the walls that are closing in around you.  The doctor’s diagnosis might get worse.  Your marriage may fail.  Your debt might become insurmountable and you could lose your occupation.  But none of that will change the fact of Immanuel, which means God with us.

Printed on the pages of your bulletin and inside the covers of your own bible; combined with the water of your baptism; under the wafer and wine of his holy supper, God is with us.  Your Jesus is with you.

You are not alone in the difficulties and confusions you face in this world.  God is with us.  Your Jesus is with you.  Whenever you want, Jesus is there, through those means of grace, to strengthen you, help you, and cause you to stand, upheld by his righteous, omnipotent hand.

There, in his Word and sacraments, he will remind you that he took the thorns of this world and allowed them to be placed on his head, feeling the pain of this world, to show you how much he loves you.

There, in his Word and sacraments, he will recount to you how, when there was no way out, he submitted himself to death on a cross, so that you would not have to pay the price for your own sins.

There, in his Word and sacraments, he will invite you to come to him and lay the weariness weighing you down because of sickness and disease onto him and his shoulders and receive from him rest instead.

There, in his Word and sacraments, he will show you that, even though you have been unfaithful to him, he will always be faithful to you and that there is nothing you can do that will convince him to separate himself from you.

There, in his Word and sacraments, he will declare to you again and again your eternal debt paid and that he has a benefits package for you that is, quite literally, out of this world.

When all this takes place in your life, See God fulfill what he said through the prophet.  See that the virgin was with child, she did give birth to a Son, and that he is Immanuel.  God is with us now and he will be forever.  Amen.

Are You Qualified for this Job? 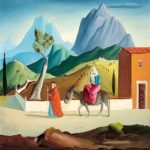