Pastor Paul Waldschmidt delivers a sermon entitled “Give Careful Thought to Your Ways” based on Haggai 1 at Peace Lutheran Church in Hartford, Wisconsin.

Martin Luther once told a story, praising the wisdom of his beloved wife, Katie.  As you may or may not know, Luther spent quite a bit of time battling his own emotional demons, along with the attacks of the Devil, himself.  In the midst of this war, he would be overcome by feelings of depression; depressed over his own sin; depressed about the wickedness of the world; depressed at the dangers facing the Church of God that he loved so much.

On one occasion, when it seemed that all was at its worst, he noticed his dear Katie dressed in her mourning dress, her clothes that were to be worn when you mourn the death of a loved one.

So, not knowing who was to be mourned, he asked her who died. God in heaven in dead, she said.  As he was wont to do, Luther went into a long and verbose explanation of how blasphemous and silly it was for her to make such a statement; that there is no doubt whatsoever: God is surely not dead!  And then, the wisdom of his wife showed through. She told him that if God isn’t dead, then stop acting like he is!

While your worries may not be the exact same as Luther’s, do you know the type of sadness he felt from your own experience?  When you’d rather just stay in bed or planted on the couch than go to work, go to that dinner party, finish folding the laundry, or wash the dishes?

While you may not want to do those things because they aren’t very fun things to do in the first place, there is no doubt that your emotions can have a strong impact on your behavior and actions.

Take, for example, the energy expressed by a 10 year old at the mere prospect of petting the neighbor’s new puppy.  Almost falling asleep, staring at the same old youtube videos, she’ll fly off the couch, forgetting even something as simple as putting shoes on her feet, and run out of the house screaming in joy.

That type of excitement can make you put everything else on the back burner and focus on the joy that you get to experience.  Nothing else matters as much as making that puppy wag his tail.

So what is the metaphorical mutt that would get you to spring up from the couch?  Is it watching your favorite baseball team make a run at the pennant? Getting that great cut of prime beef and finding the perfect cabernet to complement its flavor?  Your souped up SUV, your 80 inch flat screen, or a new wardrobe all set for this coming Fall?

Unfortunately, as you well know, when you fix your focus on those things, they will inherently let you down.  Baseball teams eventually have to go through years of rebuilding. Meat and wine have a shelf life and can spoil without much warning.  New cars depreciate. Televisions and smart phones become obsolete all too soon, and, as soon as Fall turns to Winter and Spring, that new jacket is no longer so stylish, not to mention how the fabric fades and can be ruined with the smallest spill or stain.

Like you learned from Solomon last week, not only does the pursuit of the material wealth of this world end up to be meaningless, but, also, when you finally realize that, it can end up affecting your behavior and actions, living an aimless and sad life; as if God in heaven, himself, was dead.

The people to whom Jesus was speaking in the Gospel account today were beginning to get that listless and restless feeling.  Jesus told them the parable of the rich fool and it made them wonder if their lives were just as pointless as their parabolic counterpart.

You can almost see the gears turning in the heads of each one of the disciples.  Jesus could see the fear in their faces. Is he talking about me?  Am I too dependent on the stuff of this world?  Am I going to find out the hard way?

To those who were afraid; to those who were now not so concerned about their barns full of barley, but where they might spend all of eternity; to them, Jesus said Do not be afraid, little flock.

What a change!  In the former parable, the Father was a vengeful and jealous God.  With fear and trembling, people who put their focus on the stuff of this world, will do anything to avoid waiting at the door for their Father to come home…or, in a much more real way, avoid any thought pertaining to the time when the great Judge, Jesus himself, comes back at the end of the world.

They avoid even thinking about it because the truth of Judgment Day means much worse than a few losing seasons, a spoiled steak, or a hole in your favorite shirt.  If you set your heart on things that can be destroyed, then you, too, will be destroyed for all of eternity.

Thankfully, though, you don’t have to wear your mourning clothes.  Jesus says to you, too, Do not be afraid, little flock.  You don’t have a meaningless and aimless existence.  Your Father has been pleased to give you the kingdom.

Your eternity will not be one of destruction because you are a member of the little flock, tended to by the Good Shepherd.  He cared for you, called out to you, fed and nourished you, and, most importantly, he laid down his life for you, his sheep.

With his perfect life, lived in your place, he earned the pleasing demeanor of your Father toward you.  And, by sacrificing that life on the cross, he took on himself the punishment you deserved for all the times you have had your priorities misplaced and treasured the stuff of this world that will eventually be destroyed.

You have no reason to fear because Jesus’ work done for you will not wear out, and is a treasure in heaven that will not be exhausted, where no thief comes near and no moth destroys.

No matter how much the worries of this world work to wear you down and make you think it’s all meaningless, they have no ability to destroy the home you have in heaven waiting for you.

Where your treasure is, there your heart will be also.  When you treasure that salvation work done for you above all other things, it changes your behavior and your actions.  When you treasure that which is true; that which cannot be taken away from you, the prospect of Jesus coming back on the Last Day and knocking on your door changes from being a source of fear to a cause for constant hope and expectation.

Brothers and sisters, take off your mourning clothes and, instead, be dressed ready for when Jesus comes back.  Treasure the truth that you have eternal life and keep your eyes on the door in anticipation. Not only will it change the way you see the world around you, but it will affect your behavior and your actions as well.  Amen.

Treasure What is True 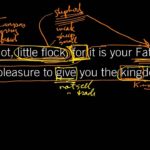 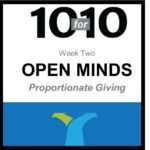 Give Careful Thought to Your Ways
Scroll to top