Pastor Paul Waldschmidt delivers a sermon entitled “A Timeless God” based on Revelation 1:4b-8 at Peace Lutheran Church in Hartford, Wisconsin.

Let’s play a game to start today. I’ll name an object from popular culture, you tell me the decade it was popular. Ready? Leg warmers. Saved by the Bell. Disco. The iphone. Pizza. Music. Baseball. Coffee. You get the point I’d imagine. Some things are so awesome that they cannot be pinned to one specific decade or relegated to one moment in history. They are bigger than that. They transcend time.

Your God is like that, even better in fact. He is a timeless classic. That’s what the apostle John says in the word before us today. Timeless is written in big, bold letters in the bookends of our text, both in the first and the last verse: Who is, who was, and who is to come. But when you look at little closer you realize that the eternal nature of God, the fact that whether it’s March or May, whether it’s 1929, 1979, 2029 or 2059, you have a God who IS….well, that fact is all over the text from beginning to end. So it must be pretty important because the Holy Spirit saw fit to repeat it often and in a bunch of different ways.

And it’s not too hard to figure why you’d want a God who was, who is, who is to come. It’s because you have an expiration date. All people do. For example, if I asked you to associate a time with John F. Kennedy, you wouldn’t have any problem doing that, you might even have a month and day to go along with the year. November 22, 1963. Not timeless. But instead frozen in time in Dealy Plaza Dallas, Texas.

One day, if Jesus doesn’t come back first, the date on the right hand side of your tombstone equation will be engraved. You know, the date that your mortal remains were laid to rest. Because you and I are not timeless.

Sin–not just a sinful, flawed world out there, but the inconsistency, the rebellion, selfishness and arrogance that sprouts and wraps its thorny vines around our hearts, that sin has put an expiration date on us. The apostle Paul wrote the wages of sin is death. The prophet Ezekiel says, The soul that sins is the one that will die. Sin puts an expiration date on us. But you didn’t need me to tell you that. We are dying from the moment we’re born. Over time, our bodies break down and cannot do what they once could. Our minds become forgetful. We get the inevitable mid-section spread or the graying at the temples. They all remind us that we are not timeless.

But 70 or 80 years is not all there is. It is merely the first chapter to our existence, not the first, last and middle. And you know why. Because you have a God who is timeless. The God who was, who is, who is to come.

When that phrase is used in this section, we can assume that it refers to the Father (v.4a). Because the Holy Spirit is the “seven spirits who are before the throne” of verse 4b and then Jesus is mentioned by name in verse 5 as “the faithful witness, the firstborn from the dead, the ruler of the kings of the earth.”

If Jesus had stayed dead, he too would’ve been crystallized in a bygone era like a historical figure of long ago. Worthy to be respected? Yes. Emulated? Sure. But a living Savior who could actually help you? No.

But that’s not Jesus. The firstborn from the dead. That might be the best Easter sermon ever preached in five words. In those five short words, we are told that he is not dead, that his tomb is empty and his tombstone has the right side of the equation scratched out. In those five words we are told something else though. He is the firstborn of the resurrection. But where there is a firstborn there are brothers and sisters who will follow in the footsteps. And that is you and me, Jesus’ family through faith. The firstborn is risen! One day the brothers and sisters too shall rise! A timeless God enables you to live eternally.

So what’s one thought to take with you, to tuck in your heart and carry with you this week? How about this? Live confidently!  Because you are loved. John describes Jesus as “the one who loves us.” That is a present tense there—something that’s happening right now. A Jesus still in the tomb couldn’t do that. But a Jesus who’s alive sure can!

Live confidently! Your sins do not define you. John describes Jesus as “the one who freed us from our sins.” That is a past tense there—it’s something that happened long ago. The blood stained cross remains frozen in time, an indisputable, historical fact, proclaiming loudly to you, “The past is the past. Your debt has been paid. This rough wood is your receipt.”

Live confidently! You have important work to do as you look to the future. John describes Jesus as “the one who has made us a kingdom of priests for his God and Father.”  Priests were characterized back in Bible days by their noble work as mediators between God and the people. Now God has made us a kingdom of priests. What is the noble work that he has for you? Could it be that God would use us? Could it be that a living God would use creatures so frail and imperfect to carry out his plans and to take care of his people?

It’s easy to see a child going through a rough patch as a pain in your heart, but could it also be your opportunity to love them even more tenaciously, to serve them as their parent with Christian help and guidance? It’s easy to see a spouse making demands of your time as a burden, but could it also be your opportunity to give selflessly, imitating Jesus by someone else’s needs ahead of your own? Aging parents, a single heart lonely and looking for the right mate, a young lady wrestling with self image problems, a person undergoing career turmoil, a person regretting a haunting mistake from the past—everybody comes into your life carrying something heavy. Lighten their load. Share Jesus with them in your actions. Live confidently because there is important work for you—as a kingdom of priests.

At the end of the day, you have a God who is everything you are not. And that is the best news in the world! For do you really want a God who is the same as you? A God who gets exhausted? A God who misremembers? A God who has an expiration date? Of course not. You want a big God. A powerful God. An all-knowing God. An Alpha and Omega, A to Z, timeless God. That is the God the Bible teaches us about. That is the God you have. In him, you will live eternally. In him, you can live confidently. Amen.

He Appeared to Peter 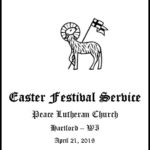 Jesus Gives Sight to the Blind
Scroll to top