Pastor Aaron Steinbrenner delivers a sermon entitled “More Than Meets the Eye” based on Matthew 3:13-17 at Peace Lutheran Church in Hartford, Wisconsin.

When I was a kid I think I read just about every Sherlock Holmes novel or short story Sir Arthur Conan Doyle wrote.  Sherlock was a master at noticing the things other people often missed – the faint scent of perfume, the mud spatter on the shoes or the overcoat, the ink stains on the fingertips – those small details meant something.

Today’s gospel is seven sentences long, but there are some details we won’t want to miss.  Some are small and some are stand-out obvious…but they all have meaning.

What’s the first little detail?  Well, the first little word:  “Then.”  In Matthew’s Gospel, the last you heard of Jesus was the trip to Egypt and then back to Galilee when he was a baby.  Some time has elapsed…about 30 years.  John the Baptist is introduced.  He’s the voice calling in the wilderness…the voice urging people to repent…the voice preparing the way.  Preparing the way for who?  For Jesus.

THEN Jesus came from Galilee to the Jordan.  Some important things in the Bible have happened at the Jordan River.  Can you think of any?

We know why we are baptized…but why did Jesus say, “I need to be baptized by you, John.”  John wondered that too.  You might recall that John had previously referred to Jesus as the Lamb of God and as one greater and more powerful, whose sandals John wasn’t even worthy to untie or carry.  So John initially tried to deter Jesus.  “Let it be so”…Jesus says… “to fulfill all righteousness.”

So Jesus goes to the Jordan…goes to John…goes to the waters of baptism…not for the forgiveness of sins but to fulfill all righteousness…to show he was the promised Messiah…to publicly begin his ministry and his slow walk to the cross.  Jesus had been fulfilling righteousness as a child, as a teenager, as a young man.  Now was the time for him to be acknowledged not just as the carpenter’s son from Nazareth but the Messiah, the Son of God.

John consented.  Jesus was baptized.  And then the details that are stand-out obvious.

That’s very nice pastor.  Thank you for the overview.  Much appreciated.  But tell me how this event 2000 years ago at the Jordan River impacts my life today.  Well, remember, Jesus’ baptism showed who he really was.  It showed that he was the beloved Son of God now starting his public ministry as teacher and healer and Savior and soon-to-be atoning sacrifice on Calvary’s cross.

Your baptism shows you who you really are.  And we need that regular reminder of who we really are because sometimes…

When I look in the mirror, I see what you see.  A sinner, who has been cleansed…a sometimes tired, sometimes weak disciple, who has been given the strength to be as kind and as forgiving and as courteous as Jesus has been to me.  And if I look real closely, as any Sherlock Holmes fan would do, I see the sign of the cross both on the head and on the heart that marks me as a child of God.  Children of God – never alone; always loved – that is what we are.  Amen.

The Good News Has Been Made Known to You 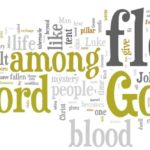 Look the Lamb of God!
Scroll to top