Pastor Jeremy Husby delivers a sermon entitled “It’s All About Jesus” based on Luke 7:1-10 at Peace Lutheran Church in Hartford, Wisconsin.

If you were to come across today’s Gospel while you were reading in your own bible, you would likely see a heading above it.  That heading would be there for a few different reasons.  It is, indeed, the start of a new chapter in Luke’s Gospel.  It’s also the beginning of a new account in the record of Jesus’ words and works.  In fact, the very first words of this account indicate that Jesus had finished saying all this, his Sermon on the Plain, with its blessings and woes, and was now moving on, entering Capernaum.

If you had to come up with that short summary statement about the next ten verses, yourself, you might write something like, “the healing of a centurion’s servant,” “a centurion’s sick servant,” or, perhaps, “the faith of the centurion.”

It makes sense to include something about the centurion in that title.  When you read this section, he is one of three main characters and his characteristics are fleshed out more fully than anyone else’s.  From reading this section, you come to know that he was somewhat of an important man.  By definition of his title, and later by his own explanation, he was put in charge of soldiers, likely a hundred men, who did his bidding simply because he said so.

This account, though, doesn’t only share his military and professional prowess.  Apparently, he was a man of the people, as well.  As a Roman Gentile, and one put in a position of power on top of that, he had no need to endear himself toward the people of Israel.  They, too, would’ve had to respect him simply because he said so.  But, instead, he not only loved the Jews, but even showed his love.  The original language here indicates with emphasis that the centurion, himself, built the people a place of worship.

This man deserves to have you do this.  This Gentile, who respected Jewish tradition and ceremony enough to send Jews to Jesus and to not even ask Jesus to enter a Gentile’s house and defile himself, seemed like a pretty great guy.

Would your friends and family members say the same things about you?  Brian is the kind of guy that will give you the shirt off his back.  When you look up wife or mother in the dictionary, there’s just a picture of Leigh.  Dale spends more time fixing things around church than he does at home.  Even with all the hats that she wears throughout the day, Ellen’s Christianity is always on her sleeve.

Whether secularly or spiritually, you have demonstrated your love for God and your love of people in so many different ways, not even counting the actions that so often go unnoticed.  Whether people see it or say it or not, you have been pretty great people.

Is that why, at times, you find yourself feeling so disappointed?  Is that why, so often, you wonder why she doesn’t appreciate what she has with you?  Is that why, when you open your paycheck, you feel slighted?

Or, is it worse?  For you, trying to be a good Christian, do you put things in their proper perspectives and place the blame for those things where they logically belong?  If God is behind all the blessings that you receive, do pain, poverty, sickness, sadness, and stresses cause you to find fault with him?  Do you deserve to have Jesus’ blessings in your life but, so often, find him lacking to hold up his end of the bargain?

The reason those thoughts seem so right and so alluring is because that is what your heart and your mind are naturally inclined to think.  The sinful nature inside of you seeks to find and measure worth in the wrong places.  It seeks to make you the center of the story.  You want the heading and short summary statement to be all about you.

Unfortunately, though, like this account from Luke’s Gospel, your story doesn’t stand on its own.  It is a small section snipped out from the larger tome and the truth of the matter is that, while you play a part, you aren’t the main character.  It’s not about you.  It’s all about Jesus.

The centurion’s servant was healed.  But, Jesus didn’t heal him because the centurion was an important man or because he was so deserving.  Even the centurion, himself, knew that.  Listen again:

Jesus “was not far from the house when the centurion sent friends to say to Him: ‘Lord, don’t trouble yourself, for I do not deserve to have you come under my roof. That is why I did not even consider myself worthy to come to you. But say the word, and my servant will be healed. For I myself am a man under authority, with soldiers under me. I tell this one, ‘Go,’ and he goes; and that one, ‘Come,’ and he comes. I say to my servant, ‘Do this,’ and he does it.””

If this was the account of the centurion’s worth, or if your headings indicated that your story was about what you deserve, it would be the worst tragedy ever written.

The book of life, in which your name is written, does have a description of your character, but its development, like the centurion’s, doesn’t start with the love you have shown for your nation or your church.  It starts way back in the Garden, where you inherited a character flaw so bad that it taints and tarnishes each and every thing you have done and will do in this world and, because of it, your worth and what you deserve amount to absolutely nothing.

That development, though, is what sets the stage for this to be the best book ever written.  Knowing your own worth and what you truly deserve makes what the main character did all the more impressive, important, and indispensable.

Compelled by nothing other than his great love for you and for all people, Jesus saw your spiritual illness and came to heal you in the only way that would work.  He used his authority and power and said the word.

Tetelestai.  Translated from the Greek, that means it is finished.  Jesus said it while he was hanging on the cross.  By saying the word, he proclaimed the completion of two things.

The innocent life that he lived on this earth, which deserved eternal life, was sacrificed on that cross to complete and finish the salvation work that he came to accomplish.  With it, he was able to pay the atonement price that covered all of your tainted and tarnished thoughts, words, and actions as well as the sinful nature inside that caused them—yours and everyone else who has ever and will ever live on this earth.

And, because of his sacrificial life and death, that word, tetelestai also proclaimed your completion.  He finished your character development.  Next to your name in the book of life it simply says “holy and righteous child of God.”

The simple summary statements in your life may, at times, indicate the hardships you endure.  They may hit the highlights of your birth, your relationships, your career, your health, and, eventually, your end.  But, no matter how much you loved your people and your church, thankfully, the story isn’t about you.  It’s about the One who loved you and showed his undeserved love for you.  It’s all about the One who reached out to you, washed you clean in the waters of your baptism, strengthened your faith with his words of promise, and gives to you his body and blood for your forgiveness.  It’s not about you.  It’s all about Jesus.  Amen.

A Shelter in the Storm 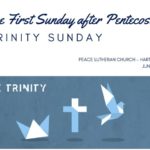